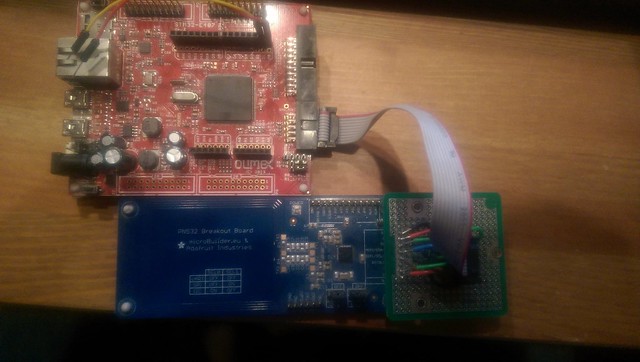 If you have followed my Arduino blog you know that I have written some time ago PN532 routines for AVR-Ada.

Now, to play with Ada_Drivers_Library, I decided to port my PN532 routines to ARM Cortex-M4 using STM32F4 board (STM32-E407) from Olimex.

The porting process was relatively smooth, as I already had separated SPI/I2C bus related communication from other logic. I mostly had to replace my AVR-Ada specific logging routines with ones for ARM/STM32.

The biggest problems I had with STM32-E407 board, which doesn't have its own board definition in Ada_Drivers_Library / embedded-runtimes repo.

With following tweaks to embedded-runtimes I got the board (and its UART/SPI peripherals) working:

Basically, I decreased the clock speed a little and corrected the HSE clock frequency (because the Olimex board uses 12MHz crystal).

In theory, STM32F407 on the Olimex board should be able to run at 168MHz, but for some reason the clock speed calculation algorithm used in embedded-runtimes worked only up to 144MHz.

Anyway, the code is now available under my Github account in my Ada_Drivers_Library fork.

There are some caveats though:

I suspect that they are some timing related errors as PN532 is sometimes quite sensitive to timings. In addition, in my AVR-Ada code I have used quite short timeout values for calls and they might be calculated incorrectly on ARM.

More info about me can be found from my website.